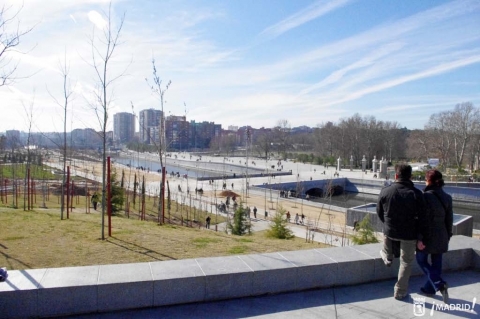 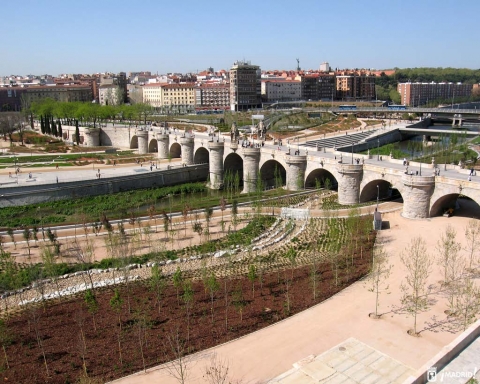 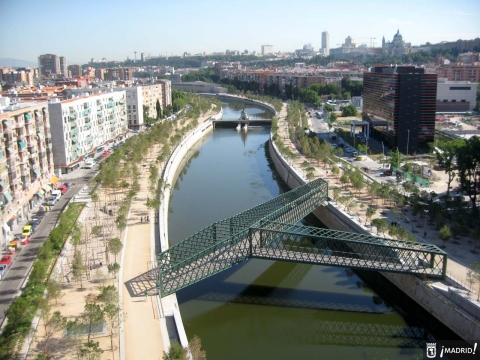 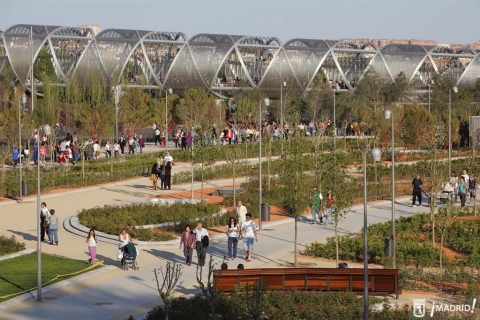 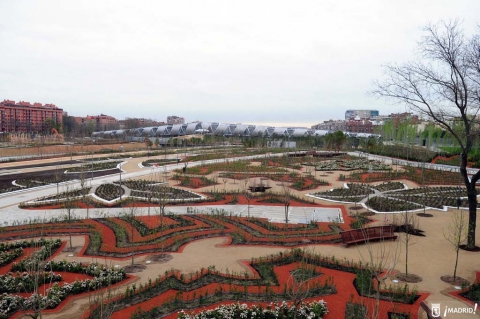 In the 1970-1979 term of office, the M30 motorway was built and the Manzanares River was restricted on its two sides by the motorway’s traffic lanes. The river was isolated, inaccessible and invisible. The motorway represented an impenetrable barrier that generated high levels of air and noise pollution. The Madrid Río project started out with the goal of restructuring the Manzanares River space to cater for the city’s uses and activities. Where there once used to be thousands of cars on the road, there is now a large linear park, a green corridor that stretches from El Pardo to Getafe, joining up the dots that were the previously unconnected woods, green spaces, historical gardens and urban parks, thus providing Madrid with an environmental infrastructure that is one of a kind in the family of large metropolises. Madrid Río has been incorporated into the city, becoming a new icon that adds specific features and values to the city’s attractions, with the full integration of Madrid’s only river in the day-to-day life of its inhabitants. In total, a universal-access surface area of 1,210,881 m2 was treated, structured around nine areas of reference: the tree-lined boulevard, known as the Salón de Pinos, forming the backbone of the entire park; the six landscaped areas spread from north to south (the gardens of Aniceto Marinas, Virgen del Puerto, Puente de Segovia, Puente de Toledo, Matadero and the Arganzuela park), the Avenida de Portugal boulevard, which extends the park to the west, and the Huerta de la Partida, which connects it with the Casa de Campo park. Throughout the length and breadth of Madrid Río, there are 30 kilometres of cycle paths; 33 sports fields for skating, skateboarding, climbing, 7-a-side and 11-a-side football, futsal, padel tennis, tennis, basketball and BMX cycling; 17 children’s play areas with 65 elements; 3 fitness trails with 22 elements; 7 pétanque courts; 12 games tables; 3 cultural event platforms in the Puente del Rey and Matadero and an Interpretation Centre for the Manazares River, which adds to the Matadero Madrid cultural centre. In addition, with the aim of making the park more comfortable and enhancing its enjoyment, 5,506 new benches, 63 drinking fountains, 84 bicycle racks with 637 spaces, as well as 8,528 lampposts have been installed. To facilitate crossing between the districts located on both banks of the river, there are 33 walkways, noteworthy among which are newly built bridges that have become new city icons given their uniqueness, such as the Arganzuela monumental bridge, the Invernadero and Matadero twin bridges, the Principado de Andorra bridge, or the so-called oblique bridge, built on what were previously carriageways of the old M30. The new passageways add to the historic bridges of El Rey, Segovia and Toledo, among others. Water is one of the main features in the park, which is home to 13 ornamental fountains, and a city beach comprising three aquatic areas located in the Arganzuela park, thereby meeting the request put forward by children in the Madrid Río Children and Young People’s Competition. Moreover, this new green lung constitutes a superb point from which to contemplate the city from its five viewing points: Glorieta de San Vicente, Huerta de la Partida, Segovia bridge, Arganzuela bridge, and the Nudo Sur pedestrian and cycling walkway.